Since we were little we have never been able to stop feeling admiration, respect and even some fear for the giants. Festive elements of more than 3 meters high are always monopolized all eyes on the parades and in their dances. Therefore, the giants or gegants, as we know them in El Prat, are a sample of the local tradition that represents us. In our town we find several of them and today we present them to you. In MuchaMasia, the Rural Hostel Urbà del Prat de Llobregat, we want you to know the traditions of our town. Today we are going to explain how are those giants that measure more than three meters, since in the city there are also gigantic schools and entities.

The giants of the city: Rotllà and Griselda

Rotllà and Griselda are the two oldest gegants in the city. They were created in 1954 and represent the physiognomy of the Catholic kings. They came out of a mold that has been reproducing very similar figures throughout the territory. This couple was built in the El Ingenio Workshop in Barcelona. They measure more than 3.50 meters and mean the highest degree of protocol in the city. They only go out on the street in Fiesta Mayor and Corpus, and in some other exceptions. Majestic, they wear their capes and dresses on the streets of the city. If you want to see them, they are always exposed in the hall of the town hall. 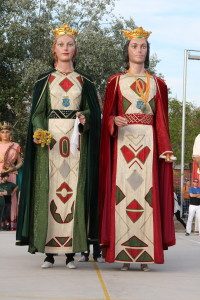 Pere and Paulina, the agricultural tradition

The giants Pere and Paulina are ported by the Agrupació Gegantera Recreativa del Prat. This couple represents the agricultural tradition of Prat de Llobregat. They are named Pere and Paulina in honor of the town’s co-patrons, Sant Pere and Sant Pau. The giant Pere is a farmer who grows rice. That’s why he has a hoe on his shoulder and wears those clothes that protect him from mosquito bites. Paulina is a peasant from the late nineteenth century, who is distinguished by a basket on her left arm that carries a Potablava chicken, typical of our town. Pere and Paulina are from 1981, measure 3.40 meters and usually travel throughout Catalonia. The last restoration corresponds to the Casserres de Solsona Workshop. If you want to see them, they are exposed in El Nus. 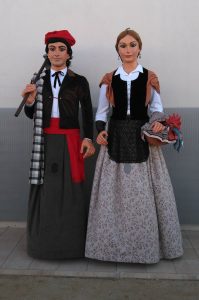 The aviator Josep Canudas and Eulàlia, the woman fighter

The gegants of the Delta are Josep Canudas and Eulàlia. These giants belong to the Delta Gegantera Association. First they created Eulàlia, a giant who pays tribute to all the women workers of Prat. It precisely wants to symbolize the owner of a hostel that existed in El Prat at the end of the 18th century. For this reason, the Delta giants celebrate their annual party around March 8, International Women’s Day. His companion is Aviator Josep Canudas. This figure wants to recognize one of the first aviators of Catalonia and who flew at the Prat airport. Both are the work of the artist Toni Mujal and also travel throughout the territory representing the city. If you want to see them, they are exposed in El Nus. 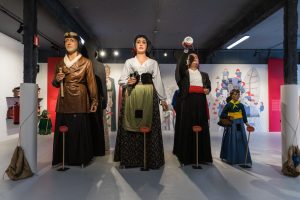 Since this year 2019, El Prat has another new pair of giants. In this case they are the giants of the Cultural Association of the Sants Metges, linked to the Parish of Sant Cosme. The giants evoke the figures of San Cosme and San Damián, co-patrons of the Prat. They measure more than 4.5 meters and are one of the highest in the province of Barcelona. This couple is accompanied by two other giants that evoke doctors just before they become saints. These festive elements were created in the Eskuarterun workshop in Pamplona and are exhibited in the parish of Sant Cosme. 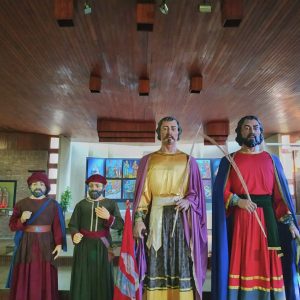 As you can see, the highest gentlemen and ladies of El Prat, are delighted to be able to enjoy the popular culture.