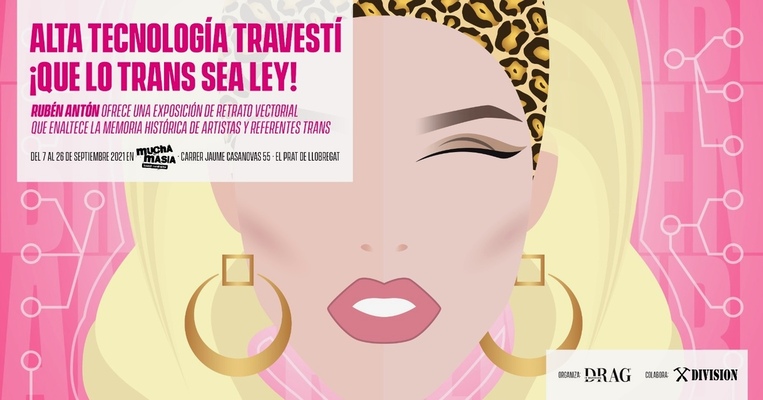 For this occasion the artist Rubén Antón presents for the first time this unique collection of 15 vectorial portraits that celebrate the historical
memory of trans artists, of great influence inside and outside our artistic community, and promotes the fight for an integral trans law that is more than necessary.

This exhibition celebrates the Transvestite high tech and pays homage to the artistic trajectory of characters such as Dolly Van Doll, director and creator of the Belle Époque shows in Valencia and Barcelona.

Bibi Andersen as super vedette of the golden era of music halls and
cabarets.

Elsa Ruiz as youtuber, comedian and monologist. Yani Forner as the first trans woman to star in a film in Spanish cinema.

Carla Antonelli as the first female parliamentarian who has truly represented us as a collective in Spain, she was also one of the women who starred in the first documentary about transgender people, which was
censored in 1980 and finally broadcast in 1981 on TVE1.

Nico Elsker as a burlesque actor. Valeria Vegas as a journalist and writer. Carmen de Mairena and Violeta la Burra for their originality as essential artists of Barcelona’s counterculture. Coccinelle as the first Paris vedette who won the respect of Europe and franquist Spain.

Amanda Araújo as a performer and visual poet who starts from the nudity and reaffirmation of the trans body.

Amanda Lear as Dalí’s muse from the art scene of the 60s and 70s.
Daniela Santiago as an international actress. Dana International as the first and unique trans woman to win the Eurovision Song Contest in 1998.

Translocura as singer who in her lyrics confronts gender roles, the stigma
of drug use and the heteronorma from a dissidence perspective.

The author proposes with this to give a space for think about the TRANSVESTITE HIGH TECH and the needs of trans people, as an essential part of the LGTBIQ+ collective, who always, and just for the fact of existing, are at the forefront of this fierce struggle for our rights.